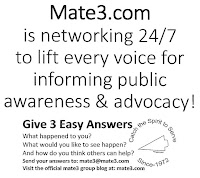 You're invited to send me any questions you have about mate3.com networking, or about me personally, I'll answer the question and post it here!  mate3@mate3.com
What is your daily work? Our ongoing work is searching for others with 1st party claims to be lifted and acknowledged. The follow-up part of our work is to compare, share and offer a first step organizing and problem solving response.

Why Have A Mate3.com Membership? I have a mate3.com membership for two reasons, one is for getting and giving advocacy assistance, and two the membership adds uses for my 1st party experiences. Getting my 1st party input to the right people and places more quickly is an asset. The membership gives my claims and experiences a longer use life. Because Mate3.com has dozens of use innovations for incoming 1st party claims; that’s better for me. Each member gains a tool for empowerment and an expansion to their personal influence. Organizers ha…
Post a Comment
Read more

Lifelong Volunteerism & Activism
His First Detroit Youth Group was started in 1972 to distribute circulars that promoted voting and the election of Coleman A. Young as Mayor of the city of Detroit. The same 13-people from the circular distribution group later became The People Organization which was founded at the end of 1972.
He started The Highland Park Hockey Clubin 1974 to be Michigan’s first African-American founded ice hockey player development initiative. (As seen in the Detroit News Tuesday August 23, 1977), (As seen in the Detroit News July 10, 1981 by Terry Cabell), (As seen in the Detroit Free Press August 15, 1985), including Detroit TV-2, Detroit TV-4, Michigan Chronicle and WCHB 1200am Radio in Detroit.  (Minimum Hours Contributed 3000)

mate3.com
Mate3.com is where answers to 3 questions are collected and applied for connecting suggestions and experiences that are shared by individuals to define problems, support advocacy and select solutions. 24/7